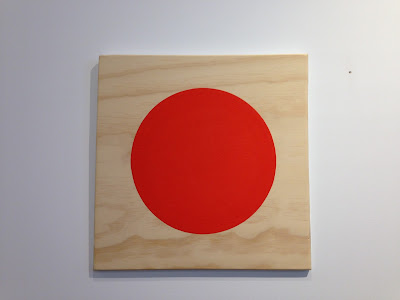 This work represents a SOLD sticker, the sticker is usually placed next to the work at the bottom right hand corner roughly 2cms from the work on the wall.  There are some galleries that use different coloured SOLD stickers, Green or Black and some have used Silver and these stickers have also been placed right down under the work near to the floor, say for instance right on top of the skirting board and even on the floor directly beneath the work.  It’s a fairly well used practice dating back to the 1920’s where the works were numbered on the wall in pencil which prompted the introduction of a Room Sheet.

Roughly at the same time was the first use of splitting the SOLD sticker in two and placing 1 half int eh same spot as a whole sticker to represent Reserving the work for a final decision to be made.  This process was used mainly by institutions as a sign of power.

Gallerist’s have been know to place initial’s of the Buyer inside the SOLD sticker in cases of multiples being sold and to save confusion.  With multiples also SOLD stickers can be placed beneath each other or side by side.  At the end of the official opening the Director and Artist usually scan the room for the sign of these red dots so as to determine whether or not the exhibition has been a success.  Less can be devastating to the Artist and the Gallery, the more red dots the more likely the Artist will have a future with the Gallery.
Posted by Unknown at 7:20 PM