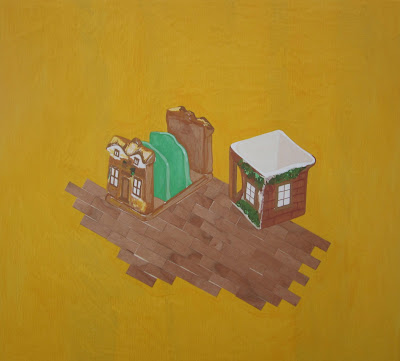 The crockery was made in England with that rambling cottage look and was chosen mainly for who and where the owner lived.    Gloria Linnegar (nee Parkes) was a descendant and resident of the village Faulconbridge that was named by Sir Henry Parkes the Grandfather of Federation, this gives it cultural significance.  But it’s also about the Bark, after which I spent years living in a concrete jungle there is now Bark in my life living in Gloria’s little house.

The Blue background in ‘Parkes I’ is the colour of the night sky in Faulconbridge and the Yellow in ‘Parkes II’ is the same intensity as Pollen which gives a good clear understanding of the amount of native flora in The Blue Mountains.